Publishing a Rust CLI to Homebrew

Recently I made a small CLI tool, which is a TLE (Two-line elements) Parser..

TLE is a data format encoding a list of orbital elements of an Earth-orbiting object for a given point in time. (Wikipedia)

and yes, it is human unreadable.

So I made a simple parser, and a cli to decode it to a JSON, to make it a bit more human readable.

So, I made this revolutionary CLI tool and wanted to publish this on Homebrew for all mac users all over the world to use.

There were some small steps needed to follow, and I just wanted to note down the steps for the future me.

In order to remove the brew tap command, you need to send a PR to homebrew-core repository. But there's obviously an approval policy. Rules like the number of github stars, to get it merged 😩.

Create a Binary file for Mac.

In rust, it's simple.

You'll need a hash number of this binary file later when publishing it to homebrew.

Run this command and keep the hash number.

Next create a github release, and upload the binary created. 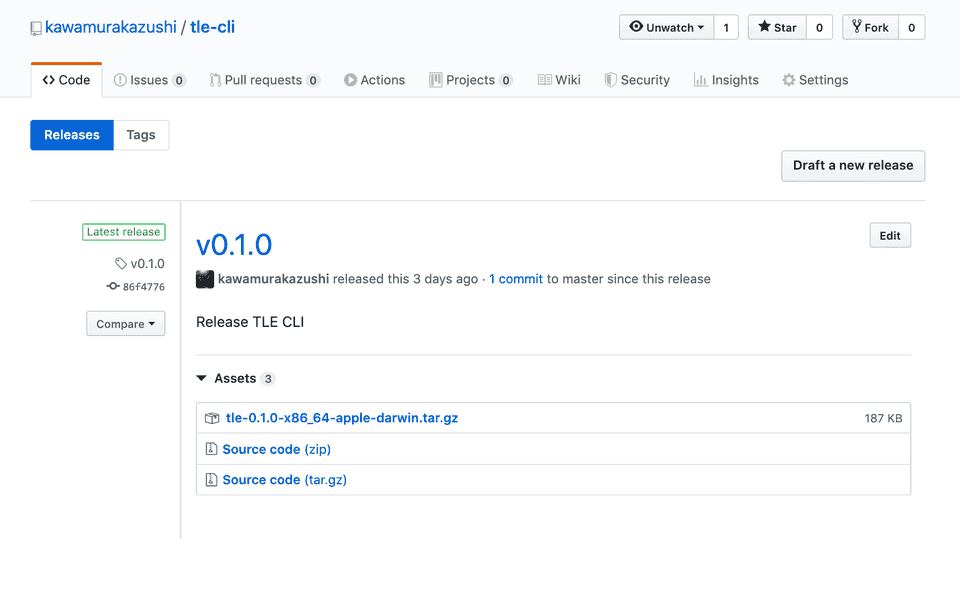 Create a new repository on Github for your tap

Next you'll need to create a github repository called homebrew-<tap name>, this is a convention you need to follow, to use the tap command.

You can have multiple packages in one tap, so I just made homebrew-tap, to avoid making a homebrew-bla repository every time I want to publish it.

So in my case, it will be like this:

Create a file, in Formula/tle.rb.

You just need to replace the strings to match your pacakge.

You can see my whole repository here. https://github.com/kawamurakazushi/homebrew-tap

Now DNS doesn't have any support for mail servers. So unlike Google Domain you can't setup forwarding for specific email from your domain…
ー 2020.01.05